Yesterday was Evan's Football Game!  Because I have been so busy the last few weeks, this was the first game I was able to attend. I was so excited as I was driving to the field but when I drove up I did not know where the boys were playing. I saw Daylee walking with a group of friends so I hurried, parked the car, grabbed my chair, and started following her.  The closer I got, I noticed the boys appeared to be in their teens and Evan is only eight.  Surely this was not his team! I finally caught up with Daylee and she told me Evan was playing on the opposite field! She was just hanging out with her girlfriends! Now I had to make the trek across the field.

By the time I made it to the other field, the game was at the end of the first quarter. Luckily, I had not missed any great plays and neither team had scored.  Tiff was running up and down the field as each play was made and Jesse was holding the marker thingy ( OK, so I do not know anything about football)!


The game was a nail biter. The boys on both teams were playing a great game and by the half..neither team had scored.  I know all the panther Mom's were hoping for the win and all were encouraging their boys to push forward!  They were cheering, one Mom even pulled out cash to bribe her son to win the game! It was amazing and we were all having a great time!   It was an overcast day..pretty chilly for this time of the year..but the walk-running up and down the sidelines was taking the edge off of the cool weather. 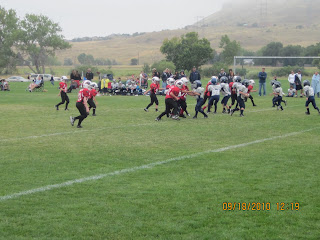 The game continued into the third quarter. Several times during the game a player would get the wind knocked out and all the other players would Take a Knee until the player was able to walk off the field. Remember, these boys are only eight and they were all very brave!


Because team is short players,  most of the boys (including Evan) have to play the entire game, every game! I would think this is very tiring for the little guys but you would never know it.  Evan is the Quarterback and he plays another position...??? do not ask me what it is..something in the back ..I will have to ask Tiffany!!!    : ) 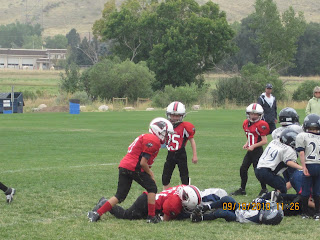 Like I said before, this game was a nail biter and by the end of the third quarter the score remained 0-0!
Tiffany was getting a little frazzled and kept encouraging Evan and his teammates to push harder!


In the mean time, Daylee had come back to play with her little cousin. Brother's game is OK but playing with the cousin..so much better!


As you can see in the picture, Daylee did not have shoes on! I asked her if she was cold, but of course she said "no".

By the end of the game the score remained 0-0!  Now the boys would have to go into overtime. I tried to calculate how many more hours they could play when one of the dads explained to me that they would now be starting at the ten yard line. Well, what a novel idea that was..why couldn't they do that from the start!!  : )

The Panthers won first ball and the real game began. You want to talk stress, this was it!
The Panther's made a TD and also made the extra point. Now if they kept the opposing team at bay...we would have the win.  Unfortunately, that was not to be. Dang if the other team didn't make  their TD and extra point. We would now go into double overtime.  STRESS!!

All the parents, on both sides, were on pins and needles. The opposing team made their four plays and were unable to score. Now we really had a chance. The Panthers had the ball and were unable to score the first two plays..then the coach huddled the boys and a plan was made. I knew this would be big.  One of the coaches from the other team kept yelling "watch for the little boy!"..well who was the little boy?

The play started..where was the ball??    Then I saw it..a boy was running with the ball sweeping to the left.. I started screaming   "GO GO...RUN!!!!!"    The other team had no idea where the ball was and when they did..it was TOO LATE!!

Now that is how you play Football!!

Every parent, grandparent and friend on our team was  jumping up and down, clapping, screaming..Yeah They WON!  What a wonderful feeling!

I had such a great time, it was so much fun watching the Mom's root for their little men!  They all had such a good time laughing, joking, nail biting, encouraging their son's, stressing and laughing some more.  If the boys stay on the same team,  these women will make long lasting friendships. Heaven help us when the boys are in High School.. because the Moms will have to take a sedative before each game!!

I could tell the Coaches were having a great time and instilling good sportsmanship in the boys. This will be a wonderful foundation for the boys as they go forward in sports.

As we left the field, the clouds remained over the mountain. One thing for sure, there was a brightness in the boy's faces.  They had Won their first game!!  The smiles were so big on everyones faces that you could not help but feel the warmth in the air!

It was a very special day and I can not wait to attend the next game!


I am one lucky NANA!