Weekend with the GRANDS!

Two weeks ago, when Erin went to Phoenix for her marathon,  I had Emma, Jonah and their cousin Jaycie for the weekend. I love to have the Grand Kiddo's, and it is even better when they are able to stay for a few days.
Emma, Jonah and their new puppy, Lucy, stayed Friday night and Jaycie joined us on Saturday.
I was somewhat leery on how the kitties would take to Lucy but it all ended up OK.

Chloe hid during the day but made her grand appearance at night to sleep with me!  On the other hand, Cecil hissed, swatted, and chased the puppy!  Now, do not feel sorry for Lucy because she did her fair share of chasing!

I had such a great time with the kids! We played cards and Scrabble, baked and had a wonderful weekend.
Why do the young girls wear different colors of sock's?  The girls have been doing this for the last few years and Nana just does not GET IT!  I will say, there are a few good things about this fad.  For instance..you do not have to match sock's when you get them out of the dryer.  And speaking of the dryer..it always seems to eat a least one of the sock's..well this no longer matters! 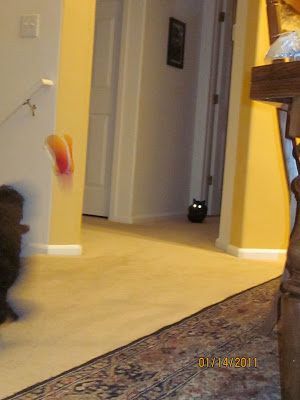 Cecil, staying his distance from the puppy! 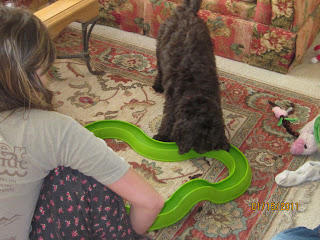 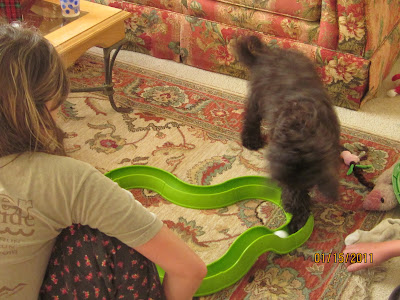 I bought this great, or so I thought, toy for the cats. The cats will walk by, give it a swipe or two, then ignore it the rest of the day.  Lucy could not get enough of it..she wanted to play with it all the time.  Would it be wrong to re-gift to a puppy?  Hmmmm!!??

We played several games of Scrabble and it always seemed like I ended up with all consonants. 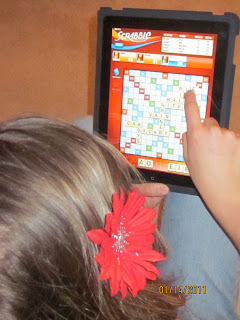 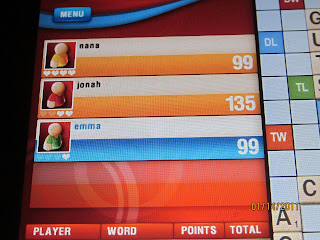 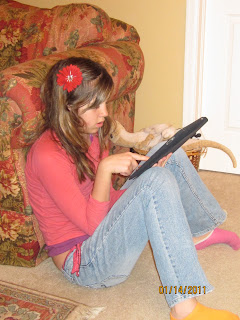 All during the night, Emma and I were pretty even but Jonah was always way ahead of us in points. Little did we know, he was using the option Best Word!  Luckily, he could only use the option four times...then we made our move!

Jaycie joined us on Saturday afternoon and Jonah went to spend the night at his Daddy's house. I hated to give him up but felt it was important for him to spend one-on-one time with his Daddy.

Grandpa Bill was now surrounded by WOMEN!  He did not have a chance with us girls.  And Cecil, being the other male, was not any help!

Emma had a dance class Saturday morning from 10-11:30.  When I picked her up she informed me she had left part of her costume at home and ( giving me those Sad Eyes) she did not know what to do.
Now I remembered what it was like to have a teenager at home! I drove her back to her house where she quickly retrieved her costume, climbed back into the car, and showered thanks and told me her Mommy would have been mad at her for leaving the costume.

ARE YOU KIDDING ME!  My girls used to tell me, minutes before we had to leave for a recital, that their tights had a hole in them. And me the rescuer  being the wonderful mother that I was,would scramble around and save the day for them.

This time, Nana saved the day and had her back to the studio, by 1:00, for a second class. Then it was back to pick her up at 2 (she did not get out until 2:30) and by the time we went to the store, to buy three decks of cards, we finally got home after four.  I forgot how tiring being a teenagers chauffeur could be!

When we got home, I was able to sit and have a drink quiet moment to myself.  Do you think this lasted long?  Oh, No Way!  Hubby was hungry. I went to the kitchen and made dinner ordered pizza.
Ordering pizza, online, gave the kids quiet a laugh. For some odd reason I kept messing up the order, thought I had ordered twice, lost the site, got back to the site ( all the while the kids were laughing so hard I thought they would pee their pants) and after a gazillion attempts, placed the order.

After dinner, we played cards until Nana could barely keep her eyes open, then the old farts  Nana, and Grandpa Bill, went to bed while the kiddo's stayed up to watch movies.

Sunday morning we went to church.  After the service,  Chris ( Emma and Jonah's daddy) picked up Emma so he could take her to a dance rehearsal in Denver. He then had to chauffeur Emma, and Jonah, back to our house that evening.

We had a great time that night, playing more rounds of cards and drinking hot chocolate. Earlier in the day  we went to the grocery store and bought Jumbo Marshmallows.. Have you seen them?

I would say they are about 3X3..90 calories per one marshmallow! I Love Marshmallow's!

If I remember right, Jonah had his cocoa with a marshmallow and whip cream!   Remember: What happens at Nana's, Stays at Nana's!

Monday, at about noon, Erin came over to pick up the kid's. We had just finished a batch of cupcakes and she helped us frost and decorate them. I wish I had taken a picture of how pretty they turned out. They made scratch yellow cupcakes, with pink butter cream frosting topped with a maraschino cherry.

I was so sad to see them go but it was a great weekend and another chance to make our Memories.