I was at the pet store buying my little darlings canned food    ( which they will surely stick up their noses at ) and I found this wonderful toy called Thing in a Bag.  I had seen something similar at a craft show and thought this would be the perfect toy for the furry kids.

First, let me tell you, these cats are not only finicky with their food, they are picky when it comes to toys. Catnip does not interest them, Turbo Track..no way,  feathers will keep their interest for a few minutes and the list goes on. I have spent so much money on toys but being the good Mommy that I am, I keep trying to find that purrrfect toy!

So, when I was at the store scouring the shelves for something new, I  saw one ( beat up) box of a Thing in a Bag! I had hit pay dirt, this was the toy I knew would keep their interest and I could not wait to get home to try it.

When I got home, I read the directions ( or thought I had),  got my screwdriver out and attempted to put in the batteries.  My first mistake was not reading the directions thoroughly. I saw four screws, loosened them, opened the battery case up...there was nowhere to put four batteries!  *%&#
I got the box out of the trash and looked at the diagram..I had opened the wrong side!!!  Now I had to put the darn thing back together.  A spring flew out, the on/off button fell on the floor, my patience was running thin but I finally pieced it back together. I looked at the diagram once more, turned the contraption over and saw one, lowly screw to loosen. Boy, that made it a lot easier! I put the battery pack in the bag and placed this treasure on the floor then called my darlings in to see it. 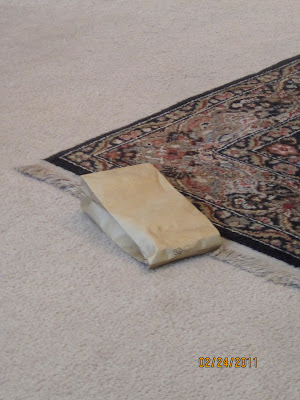 On the bag is a small dark circle.   When you push on the circle, it activates the battery which makes the bag vibrate and "walk" around the floor.  The vibration is on a pulse mode, vibrating for about 30 sec. then be still for the same amount of time.

The best parts happened so fast, I could not catch them on camera. Every time the bag would vibrate,  Cecil would jump straight up in the air and Chloe would arch her back. I think I had more fun watching them, than they did playing with it.
Unfortunately, this only keeps them entertained for about five minutes then they turn their backs, flick their tails and walk away.

Disclaimer:  I paid for this toy with my own, hard earned, money. I was not asked to review the Thing in a Bag, nor was I compensated for this post.  Now, if anyone out there want's to compensate me...feel free to do so!!!!!!